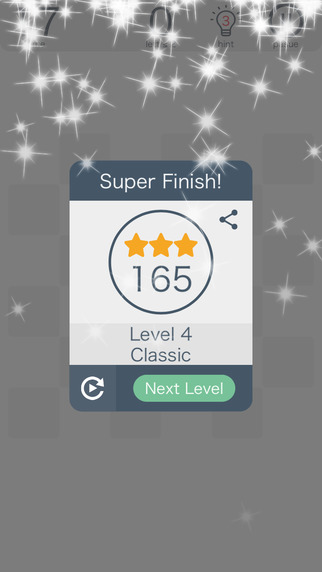 Do you like puzzles? We hope so because today we’d like to share with you our interview with Hequan Li the creator of Cross Crush Gems.

Cross Crush Gems may be one of the hardest puzzles we’ve ever reviewed. To clear even the simplest levels you’ll be required to think way ahead… A nightmare for speedy action game lovers😓

Original Review -> Check it out!

Before we start, we’d like to thank Hequan Li for participating in our interview, and for spending some of his valuable time in answering our questions. Thanks Hequan.

Ok first up, why did you decide to make Cross Crush Gems?

There are tons of eliminating puzzle games out there. One of them is very popular on flash based websites, the mechanism is to touch the intersection of identical objects to remove them. However, I’ve seen very few well-made games on mobile platform. Some of them directly transferred the game without any optimization. Since the original game needs a very large play area, commonly 20*20 grids. This makes the game un-playable on small screens. Most importantly, all the games just randomly generate tons of bricks, without a guaranteed solution. So it only depends on your luck to remove all the bricks. Then one day I thought, maybe I can do better. At least I can find an algorithm to generating a level with at least one guaranteed solution. Plus, I have tons of ideas about new game modes, for example, there are four in my game. The classic mode is pretty close to the original version, with a time limit to force you act quickly. But we know there are many perfectionists, they feel extremely uncomfortable when there is one brick left!!! So I decided to create a perfectionism mode. You have to eliminate all the gems. As a trade off, there is no time limit, but you really have to think a lot before touching a site.  Other modes like survival mode and endless mode, are for different people too.

Cool! So what programming language and or software did you use when making Cross Crush Gems?

I use Swift and Xcode on a mac, and only write for iOS platform as a start. I would say before this game, my coding skill is like just so so. But during the development of this game, I got the chance to solve tons of weird bugs I’ve never seen in other projects. Probably because all my previous coding experience is without UI, like pure C++, python project for computing something. So I had to spend lots of time on stackoverflow and read the document to solve many problems. I learned a lot through this and I believe it’s super worthwhile for my future projects.

Ok, here is a mean question. What was the hardest problem you needed to overcome when developing Cross Crush Gems?

As an indie, I guess the most difficult issue is the “Design & UI”. I’m a typical Engineer&Science guy. I dress in a T-shirt and jeans. Oh come on! What kind of “aesthetic standards” do I have?!  When I first finished the core of the game mechanism, the prototype was so ugly that I wanted to cry. Then I asked many people for suggestions, especially my girlfriend. She made me change all the color bricks into gems. She gave me a lot of advice on the design. I also learned many tricks by studying tons of iOS best selling games.

To summarize, the total time for this game was about three month. The prototype of the game mechanism, only took two weeks. The rest, all for UI and design. It’s painful yet worthwhile.

I cannot say I’m 100% satisfied with the result, but I can say it’s the best I can do without a designer.

I like to look at other games, both well-made and ill-made ones, especially many unsuccessful games can give you a lot of ideas. Why was it unsuccessful? Is the game mechanism interesting enough? What can you do to improve it?

I also get a lot of advice from friends.

Well, I have to say, I’m making a very interesting new game. It’s based on a similar game mechanism as Cross Crush Gems. But it’s much easier yet challenging. It’s a number puzzle, like 2048. I’ve already finished most of the parts, I expect it would be finished in several weeks. I cannot give more details, but just remember IT WILL BE SUPER FUN!!!

Honestly, you guys are awesome!!! Fast response, enthusiastic. I sent my game to several website asking for a review, never expecting anyone to respond. I heard if you want to get some review, you should plan very early. Most website have a long queue that takes weeks, and they only choose several games among hundreds. So when I heard from you guys, I was super excited. I know  Edamame Reviews is not a super website that has millions of readers though. However I believe you guys will make this website bigger and bigger, and I would definitely have my future games reviewed on your website and use your website to find more fun games to get my ideas and inspiration.

Really nice to talk to you guys!