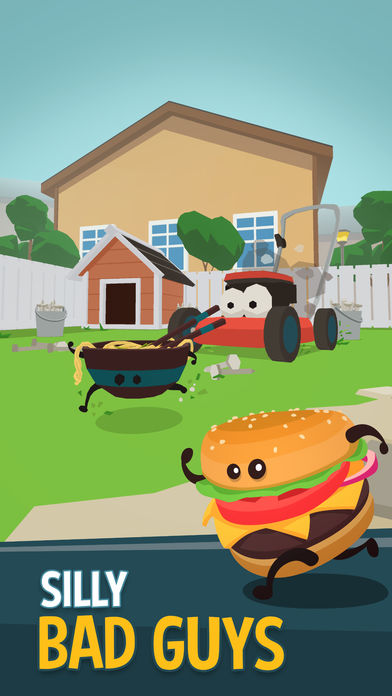 Do you remember our Silly review of a Silly game called Silly Walks? If so, you’ll be glad to read our quick interview with the developer of this rather magnificent game. This is the second time we’ve spoken with Part Time Monkey and we are hiped for more!

If you have yet to check out our review of Silly Walks, you can do so here!

Before we start we’d like to thank the Part Time Monkey Team for participating in our interview and for answering all of our geeky questions! Thanks Guys!

Thanks for taking the time to talk to us about Silly Walks, could you kick-start this interview by telling us a little about your studio and what drew you to Game Development?

I started about 12 years ago as a Junior Game Artist at Rovio, back in the Java-game days. Having drawn the Angry Birds art, I wanted to found my own company which ultimately became Boomlagoon about 5 years ago. After parting ways with Boomlagoon, I felt that I wanted to be truly independent and experiment with casual games. That’s what I’ve been doing since founding Part Time Monkey about two years ago and still going. Part Time Monkey is now me and another fellow Simo Kovanen working as the primary artist of the company.

Originally I was drawn to game development primarily wanting to make good art for games, but throughout my career my appeal of game development has shifted from creating art to being efficient in all fields (art, design, programming, audio, and overheads), though if I had to pick one of those as most interesting currently, it’d be programming.

First question. What was the core idea (or inspiration) that sparked the development of Silly Walks?

I created Silly Walks together with Asmo Jussila (www.nitroyale.com) and Simo Kovanen. The original idea came from one of Asmo’s early prototypes, which had the walking mechanic very similar to Silly Walks. I felt that the control is something unique, so we worked our way from that.

What were the hardest problems you faced during the different development stages of Silly Walks?

In a sense, Silly Walks is a pretty “basic game,” so there weren’t any specific super tough things to overcome. Designing the levels took the most time, and in such became a bit of a burden – having to battle between “I want to design great levels!” and “I just want to get it over with.”

From a programming point of view, the biggest challenge might’ve been sustaining a good level of usability with a constantly changing camera and event system. It’s quite a complex system with a lot of freedom for a level designer to choose from.

(Editor) We actually noticed under some circumstances that the camera angle wasn’t exactly ideal, however being unable to figure out why this happened we didn’t mention it in our review. It is interesting to hear that you also struggled with camera angles…

For our nerdy Developer Fans, what programming language and or software did you use when developing Silly Walks? And was it a good decision?

C# and Unity. For small games like Silly Walks, in my opinion, there’s really no other engine that’d compare even close.

Can our Android fans expect to see an Android version of Silly Walks anytime soon?

What advice would you give to a new player trying Silly Walks for the first time?

At first, the mechanic may seem frustrating and hard, but if you stick with it for a few levels, I’m sure you’ll get it and find it very fun!

Where do you get your inspiration or ideas from?

There are no specific sources. I think the best ideas come as you develop the game further and realize things that could be great for the game. From a story and art point of view, I rarely come up with good ideas (in my opinion). My best source for that type of ideas is usually just googling for some images with similarities to the thoughts I’m having in my head, and then working my way up from that.

A few words to Silly Walks fans on Edamame Reviews. Any new games in the near future? What can we look forward to next?

There’s a new game brewing, obviously. 😃 It’ll be something quite different to Part Time Monkey’s previous portfolio. More on that a little later.

Crowd City – Oh man! We are definitely not the good...

Pilot Royale Review: Fun to play… but why?