UF Emoji is an action-packed adventure game where all the main characters, prizes, and items are made from real Apple Emojis. The graphics are super rich and the gameplay is fantastic. The entire world of UF Emoji is interactive. You can blow up the earth, grass, items, and structures. Anything can be destroyed in this game.

You play your way. Instead of a renegade fighter, you can choose to be an explorer by squeezing your ship in tight places, or become a sharpshooter and only blast what’s needed.

The best thing about the game is not your laser beam – it’s the bomb! (or poop?) The bombs in UF Emoji are poop emojis💩. Not only can you shoot the poop emoji downwards, you can launch them upwards as well creating awesome effects. Watch them fall, bounce, and disappear.

You can also fire your lasers forward and backward. The monkey uses bananas 🍌 for his or her lasers that rotate in space. Your ship can also hover, fly super fast and vanish by entering a spinning vortex. 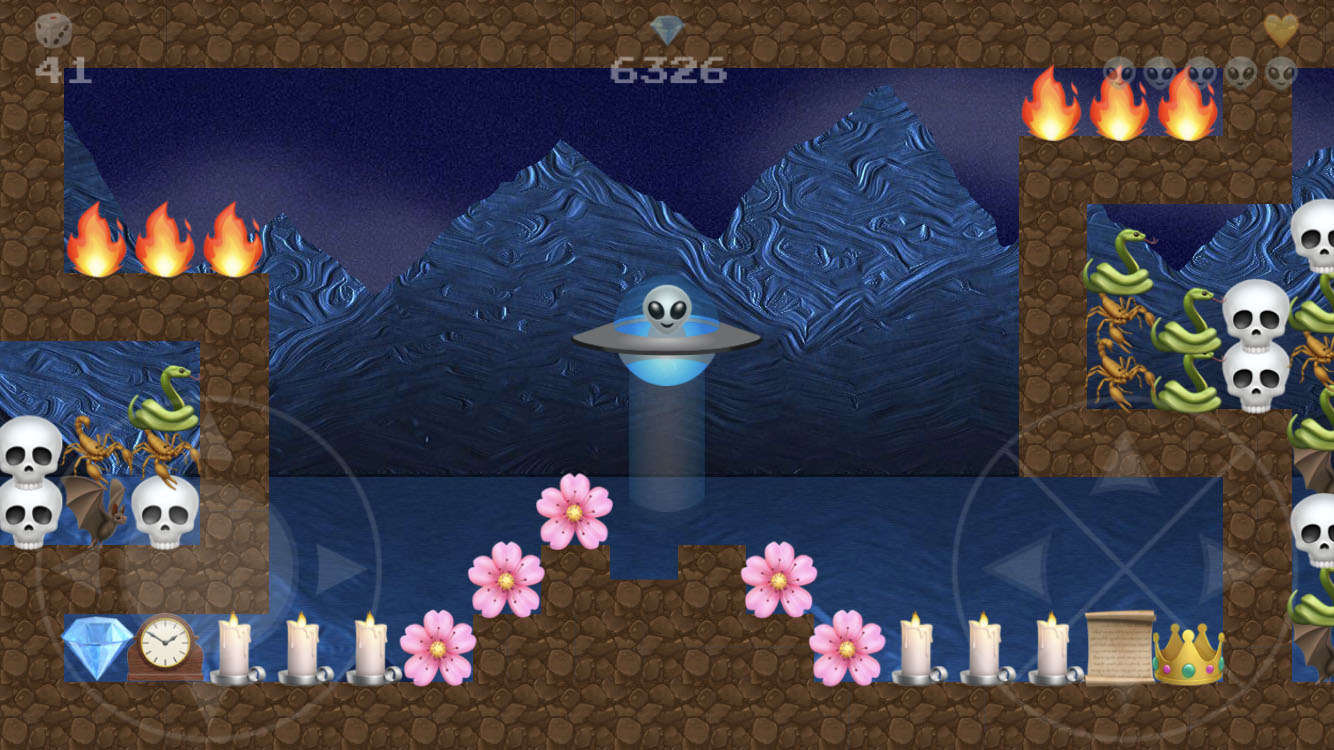 From the main menu in UF Emoji, you choose between an alien UFO 👽 or a Monkey 🐵 hero. The monkey animates while flying with his alter egos. They are the see no evil 🙈, speak no evil 🙊, and hear no evil 🙉 emojis. Each hero has their own custom ship equipped with tracker beams. This allows you to suck up friendly objects and characters in the game.

You get double points when saving friendlies with your tracker beam. Navigating your ship when sucking up good guys and gals can be tricky and may cause you to crash.

Each level has good and bad animals and the same goes for flowers. Friendly animals and flowers emit a green smoke when they expire, while villains emit an orange smoke.

To advance to the next level, fly your ship to either end of the stage and vanish through the wormhole. 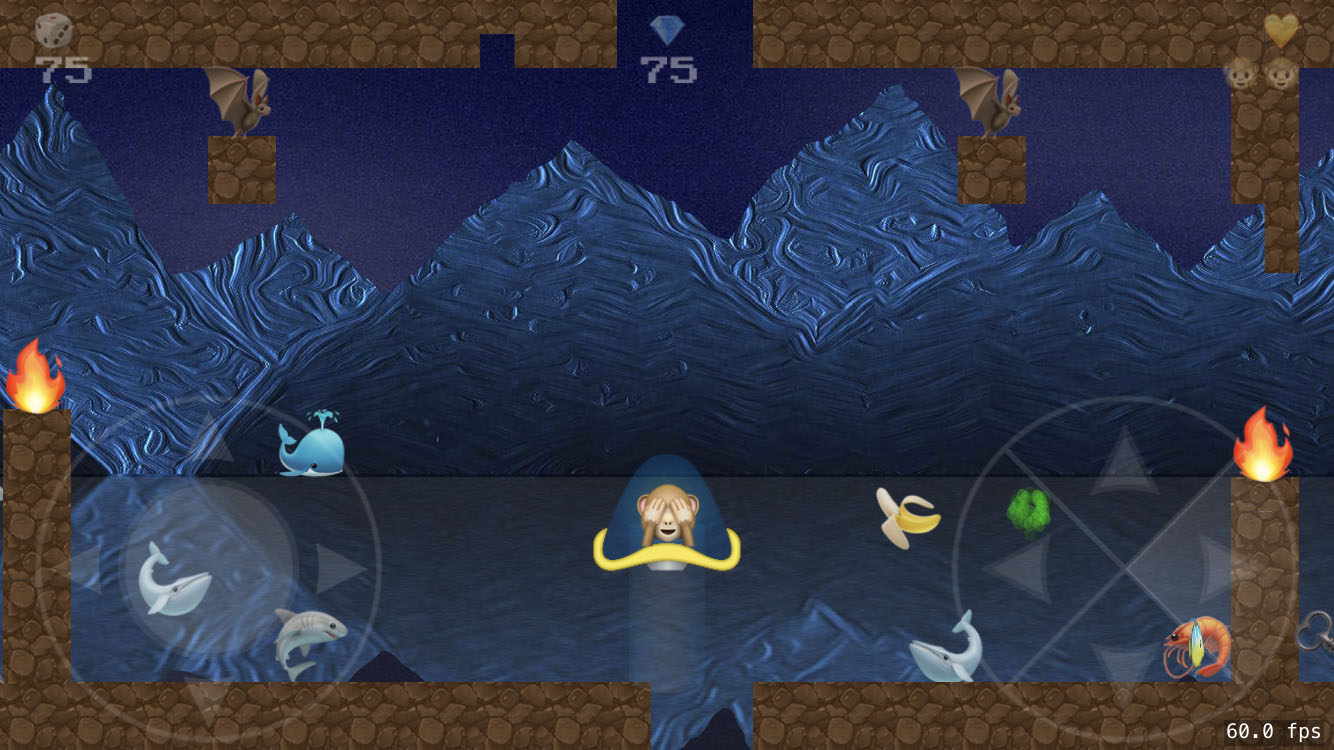 UF Emoji has 8 randomized levels with 1 million combinations per level. The odds of a level repeating itself is highly unlikely. This gives the game lots of replay value. More levels and themes are in the works including special holiday levels.

The game’s thumb-pad is a combination of a joystick and d-pad in one. When you get close to 90 degrees the knob will automatically snap in that direction. One way to use it is to just let go of the game controller. This will allow your ship to stop. Then press your thumb directly between an arrow and the pad’s knob. The thumb-pad will snap into place and your ship will fly straight as an arrow.

The ship’s four fire buttons are in an x-pattern. This unique design allows you to be either precise or loose with the controls. UF Emoji’s heads-up display has a great look and feel which really enhances the game.

Some levels have an Indiana Jones look. Some are not from this world. Some are inspirations from arcade games that I grew up playing. 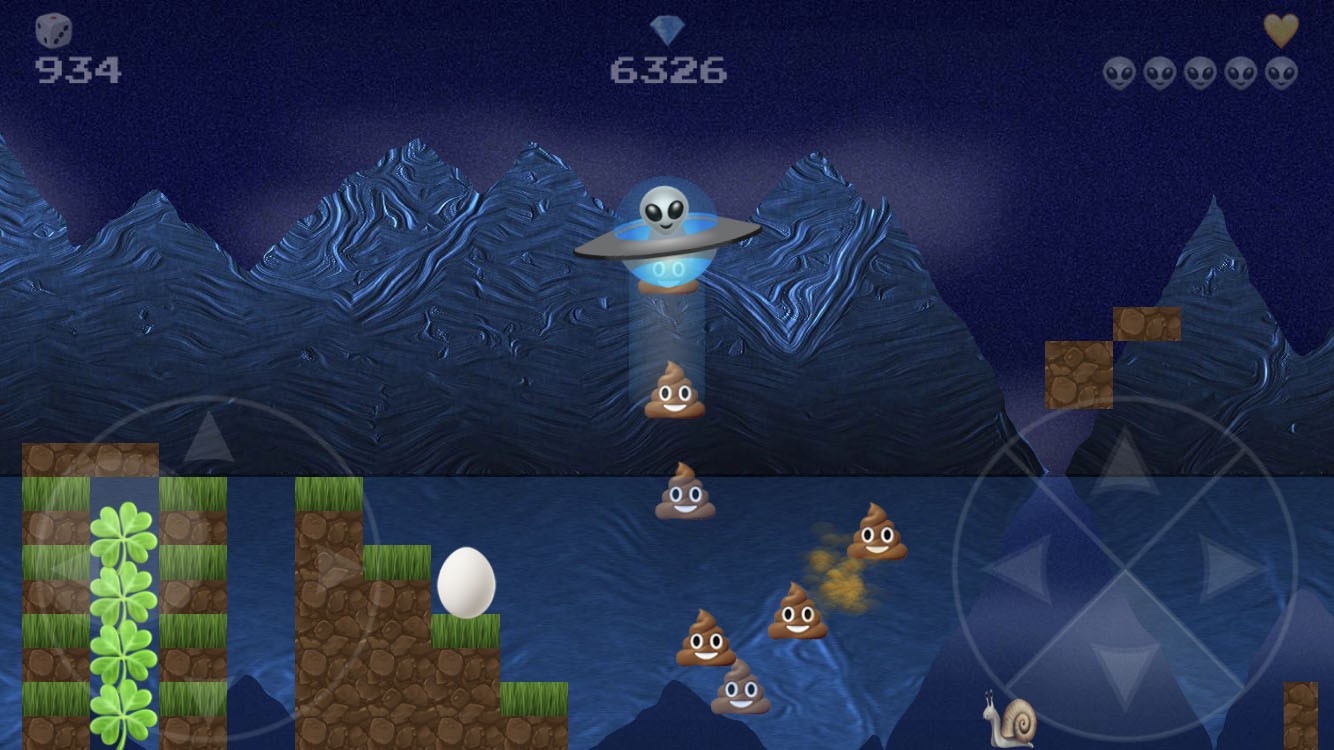 I’m an Indie Game developer with a background in Graphic Design and Computer Programming. The goal was to use real Apple Emojis as the characters and complement them with original graphics, sound, and music. I think I’ve accomplished that goal and already have plans to expand the game.

UF Emoji began on a whiteboard with a UFO emoji on one end and a wormhole on the other. It’s gone through a couple of rewrites along the way and I am very proud of this first release.

UF Emoji v1.0 build 25 Public Beta Video. Tip (which I did not do much in this video, if you press between the thumped circle and its directional arrow indicator, the ship will fly perfectly straight. You can do this up, down, left, right and use it like a 4-way d-pad. It will snap 90 degrees when it gets close automatically. You can also fly perfectly diagonal at 45 degrees but that does not snap, you have to get the angle right but going between the arrows does help! This video was recorded on a 2012 Quad Core Mac mini at full screen on a 27 inch Thunderbolt Display via USB. We are still looking for more beta testers. Send your email if interested. Thank you! UF Emoji for iOS runs on 11.2 and later on iPhone, iPad and on iPhone X. Looking for more iPhone X beta testers. Also could use some more iPad testers. Same exact game and levels plays on all devices.

This article was Published by Edamame Reviews, Written by Todd Bruss
Edamame Reviews cannot be held responsible for the content within this post.