Tetris fans rejoice! From the creators of 1010! (a game that attempted to re-design Tetris on mobile) comes a new game designed to blow the minds of loyal Tetris fans yet again…! Don’t you think it is about time the tables were turned?

Unlike the original Tetris, in Paint Tower! you are the one deciding what kind of block to drop next, meaning there is never the fear of you suddenly having to make use of an unexpected block. That being said, you are forced to use all of the ink (or blocks) allocated to you in each turn, meaning you’ll still have to think about what you are doing in order to prevent a potential disaster from happening…! 😅

Now, because there is virtually no chance of you ever messing up, ( since you are essentially the one who makes the game difficult in a classic game of Tetris ), Paint Tower! makes things a little more interesting by implementing something we’ve never seen in this type of game… a physics engine…! 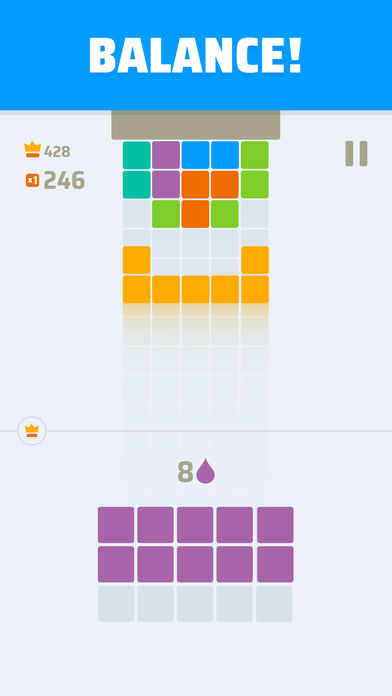 Instead of stacking blocks in order to eliminate rows, Paint Tower! is centered around building the highest stable tower possible. Although this may seem simple at first, as your tower grows, things start to fall apart, forcing you to think up new ways of reinforcing your Tetris Tower using the blocks you are given, in each turn.

Although this does sort of feel like cheating, the game does offer a bunch of different powerups that can be used to freeze your tower in place, making it easier for you to place blocks without having your tower sway back and forth unstably…

With simple yet well-designed graphics, not too many ads, and a gameplay system that is once again simple, unique, and very challenging(!) Paint Tower! is yet another game from Gram Games Tetris fans will likely really enjoy! 😆