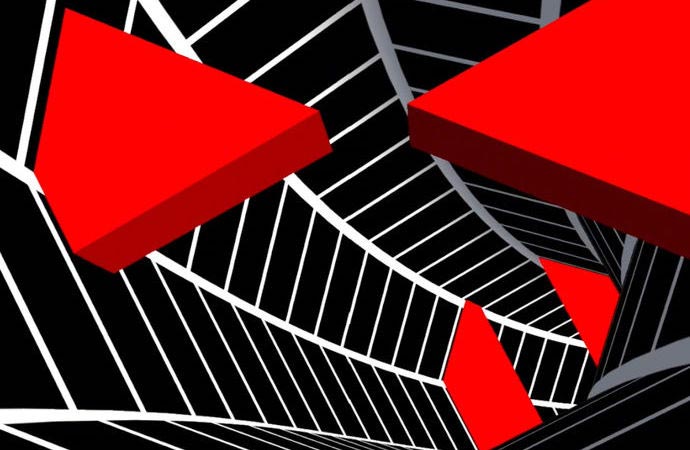 Do you enjoy playing avoider games on your iOS or Android device? We do – which is probably why we feature so many of them on our site – but it was only very recently that we discovered that there is a new breed of avoider game for your smartphone.

Almost everything becomes more difficult when you change your view from 3rd person to 1st person view. Racing games and shooter games are all harder in 1st person view (if you ask me at least) and the same can definitely be said with 3D mobile avoider games.

Set either on the inside or outside of a winding 3D tube, Tunnel Madness 3D (by App Advisory) is a game about avoiding large red obstacles by skillfully tapping on the left and right sides of the screen in order to zip around the tube.

If you’re good at avoiding certain people you’ll be great at this game! 😂

Anyway, jumping into the gameplay, Tunnel Madness 3D starts out fairly simple, however quickly increases in difficulty, length, and speed as you progress from one level to the next! Unfortunately, we are still on a fairly low level, so we aren’t exactly sure as to how hard this game ultimately becomes. 😅

For users on Android, we found a bunch of legit looking versions of this game which may or may not be fake, which is why we have not linked them in our review. Sorry guys, not all developers make things easy for us…

If you’re in need of yet another first-person avoider game Tunnel Madness 3D is pretty cool and much easier to control than Glitch Dash (by David Marquardt).

That having been said, if you like pretty graphics, and happen to be using an Android device, we recommend taking a look at Glitch Dash before you go looking for an alternative to Tunnel Madness 3D.

If you’re sick and tired of playing in the 3rd person view – or are curious to see what your helpless player sees in pretty much every avoider game ever, this is the game for you. 😂