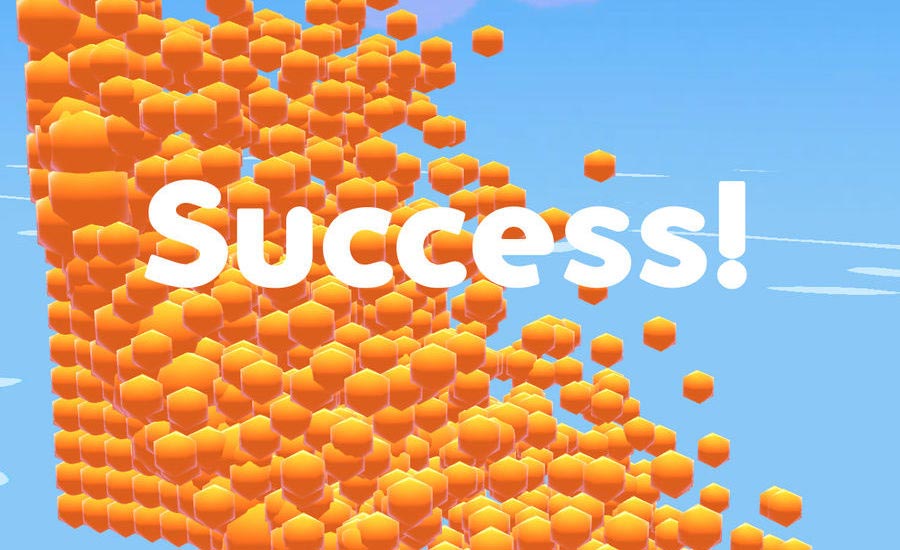 Before we start we’d like to thank the RadPirates Team for participating in our interview and for answering all of our geeky questions! Thanks!

/// Thanks for taking the time to talk to us about Ball Paint! Could you kick-start this interview by telling us a little about your studio, yourself, and what drew you into the gaming industry?

Thank you for your interest in our Studio! 😃 So RadPirates is just Antoine and I (Laurent). We are gamers before anything else and friends since high school. Like a lot of gamers, we wanted to create our very own games but didn’t know anything about programming, so a couple of years ago we decided to learn to code by ourselves & to start with tiny games.

That’s why the hypercasual market suits perfectly with our philosophy 😆

/// Ok, let’s start talking about Ball Paint. What are the highlights of your latest release?

Well, that’s hard to say to be honest! I would say that the success of BallPaint is due to the contemplative aspect of the game.

The game itself is really easy to understand (like most hypercasual games), the way the shapes are getting filled with colors is something quite satisfying and it’s a game where you have all the time in the world to complete your levels.

/// What was the core idea or inspiration behind Ball Paint? And perhaps more importantly, where do you find inspiration for your games in general?

That’s a secret! 😜 I’m joking. That is also a very hard question. We understood that hypercasual games are more about “giving a feeling” to the player more than “giving a game”.

I may seem a bit obscure, but basically, it’s like when you eat a sweet: You’re not looking for food, you’re looking for a taste. Well, we try to think this way when we’re looking for ideas. It can come from a moment in a movie, or from a satisfying video, or from just a simple action that we like to do in real life every day: Popping bubble wrap, drawing a perfect beer, or the satisfaction of seeing an hourglass getting emptied.

For BallPaint, it originally came from Antoine’s girlfriend who told us some months ago, “Hey guys, imagine some kind of plastic ball pool where you have to create some kind of wave to do something”. I know it may seem weird, but that’s exactly the kind of suggestions that we exploit to imagine 5 or 10 different gameplay from it, then we try what could be the best!

/// How long was Ball Paint in development for? And are there any interesting and/or exciting moments or experiences you would like to share with us from that time?

Well, we made the first version of the game in about 3 Days. Of course, it was far from what it is now! We’ve been working on it since then & keep releasing updates every week to add more content.

I think the most exciting moment was when Ball Paint reached the 4th place on the iOS US store. That’s something we could never have imagined when we started our adventure. And I have to say we still do not believe what’s happening to us 😃

/// What software, developer-tools, or black-magic(?) did you use when making Ball Paint? Is there anything you would like to share with the developers who read Edamame Reviews?

We do not use anything fancy! Unity & Visual Studio for coding, Photoshop for most of the UI & Particles design & 3DS Max & Blender for the 3D (both of them work as well, it’s just Antoine & I don’t have the same habits lol).

Yeah especially in the “Boss Levels”: Before extending the biggest stain, try to first connect the smaller ones. That makes the levels much easier!

/// What can we expect to see in Ball Paint or from RadPirates in the not so distant future? What do we have to look forward to next?

We are testing new mechanics every week! This week, for example, we implemented the “Boss Levels” where you get to face a more difficult puzzle & people seem to like it!

So we’ll see where to go next! To be honest, we have dozens of ideas but probably only a couple of them are going to work out, so it’s a bit too soon to talk 😜

Sure! We’ve been following you since our first game, BlazeFury almost 1 year ago & you have always kept us in the loop! Your work is really important for tiny developers like us and it is thanks to your support that we kept being motivated since then! Thanks guys! 😄

Mall.io – This game is the greatest disaster you have never...