If you had to go and fight a whole bunch of rough and tough bandits, what would be your weapon of choice? Personally we’d probably choose a tank – you can never be too safe – so the weapon the brave little guy in Kick Hero chose came as quite a surprise…

Equipped with your indestructible soccer ball, your mission in this game looks like a scene out of a manga – know Detective Conan? – smash kick your soccer ball into as many escaping bandits as possible! Crazy, but awesome!

In front of your player is a small grayed out circle that acts as your gauge. By tapping on the screen of your device the moment your soccer ball enters the circle in front of your player, you can successfully smash the ball into an unsuspecting bandit! If your kick is too soon or too late your player will trip and “Game Over…”

Though portrayed as a street fighter like “battle game,” in a sense Kick Hero is basicly a rhythm or timing game with insane visual effects and enemies to spice things up.

If you happen to love those “oldish” arcade style games, Kick Hero is going to be awesome! 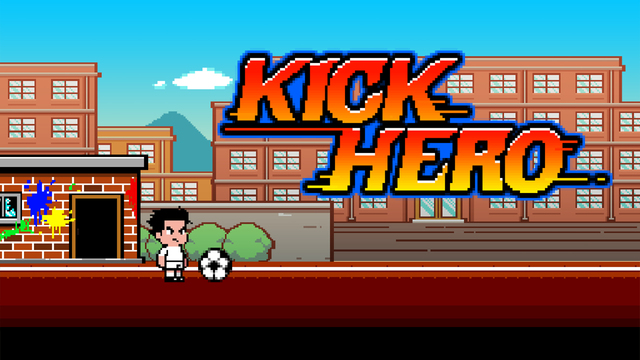 For people who play – or watch – soccer, Kick Hero is basically the dream of every fan! Imagine defeating the school bullies with nothing but a soccer ball… Amazing!

As for us… Unless we somehow manage to get as good at soccer as this guy is, we’ll still need our tank when going into battle with the 4 year olds at the sandpit…