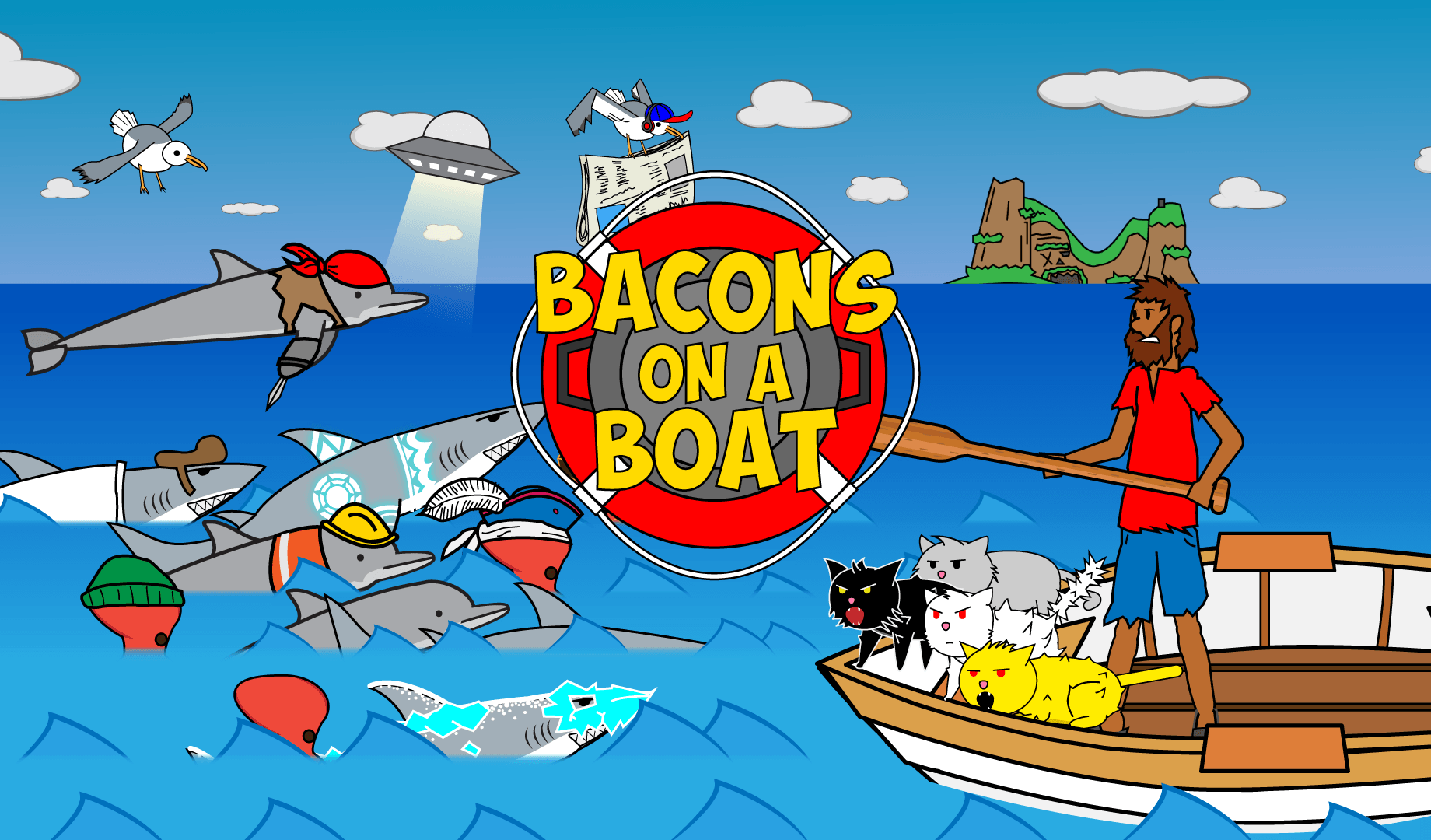 Today we are taking a moment to shine the spotlight on Bacons On A Boat by Missile Circus Studios!

Before we start we’d like to thank Anthony for collaborating with us and for taking the time to talk with us about Bacons On A Boat! 😃

/// Thank you for taking part in our latest Developer Spotlight! Before we start talking about Bacons On A Boat, could you please start by telling us a little about yourself and why you are making games?

My name is Anthony Jones, my background is in programming, but over the years I have been learning all the other skills it takes to create games and launch them.

I run Missile Circus Studios in my spare time, which limits the scope of games I can make. I make games because I see the potential for almost any situation to become the basis for a game no matter how ridiculous.

/// Moving on to Bacons On A Boat, in a nutshell, what is this new game all about?

Bacons On A Boat is a game about surviving waves of hungry creatures while cooking and eating bacon.

Each wave adds new dangers, whether it be new creatures or fortified versions of the current creatures that need to be smacked a few more times.

There are upgrades that increase the healing effect of eating bacon, increase the cooking speed, and increase your health points. Don’t forget to tap the cat when they start glowing because they can help clear the screen of enemies with their unique cat attacks.

/// Every game has a backstory, and we would love to know the story behind Bacons On A Boat! Why did you choose to make this game?

Bacons On A Boat is a game that was accidentally created from a different project during a moment of developer burnout.

While testing a feature that would randomly generate film names for a filmmaking simulator, quite a few of them made us laugh. One of them was Bacons On A Boat. Joking about how simple it could be as a mobile game, a rough design was created by the end of the night.

Putting the filmmaking simulator on hold, we began working on what was thought to be an easier project. After countless iterations and many lessons learned about project management, the game was barely playable on our phones, and this was just the beginning of Bacons On A Boat…

/// Are there any funny or exciting episodes from the development phase of Bacons On A Boat that you can share with us?

While working on adding different weapons, some of the sprites were too small because of the resolution I exported them in. My quick fix was to double the scaling on all the weapons, but I forgot the starting weapon didn’t need to be scaled up.

When I played the game with the starting weapon it was comically oversized, and could now hit even more enemies. I liked it so much I added it to the game as a power-up.

/// Where to from here? Is there anything you would like to add to Bacons On A Boat in the future, or perhaps even a new game on the horizon?

There are a couple of new islands and cats that I plan on adding to Bacons On A Boat.

I am excited about a few mobile game ideas I have had for a while, and I am currently working on a prototype for one of them.

/// Are there any secret developer tips for playing Bacons On A Boat you could give our readers?

Cooking bacon two at a time makes it easier to focus on the enemies while waiting for the bacon to become perfect.

/// A question you would like to ask your future self next time we shine the spotlight your way!

Have you branched out from just mobile platforms?

Thank you for participating in our Developer Spotlight! We look forward to talking with you again soon! 😃

Agent A – Finally! Our review of the best puzzle game...

Basketball Superstar Review: You’re 100% in control of everything!

Knife Hit – You are your own worst enemy…😥