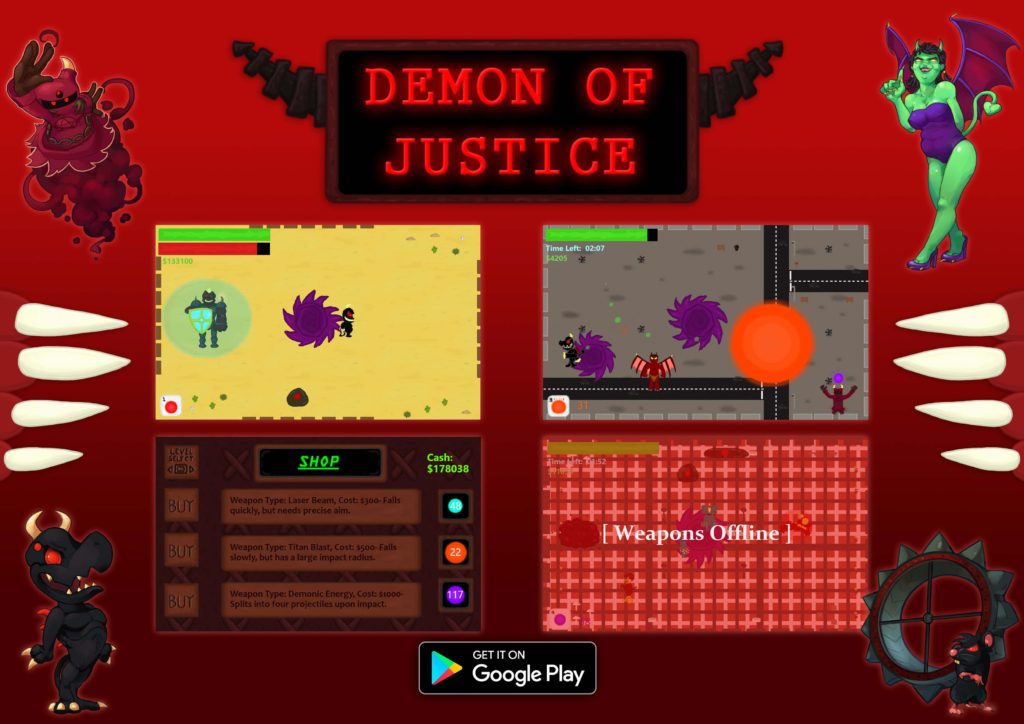 Demon of Justice is my first published game on the Google Play Store and was designed to be the ideal customer-friendly mobile game. It has plenty of content, features easy to pick up gameplay which was designed for mobile touchscreens, and has no micro-transactions to slow you down or rip you off.

In the game, you take control of a weaponized satellite nicknamed ‘Demon of Justice’. You’re tasked with taking out a variety of giant demons who have started appearing from portals throughout the world! Using skill, timing, and a lot of laser weaponry, you’ll stop hordes of invading demons from destroying the surrounding towns and cities they’ve appeared by. 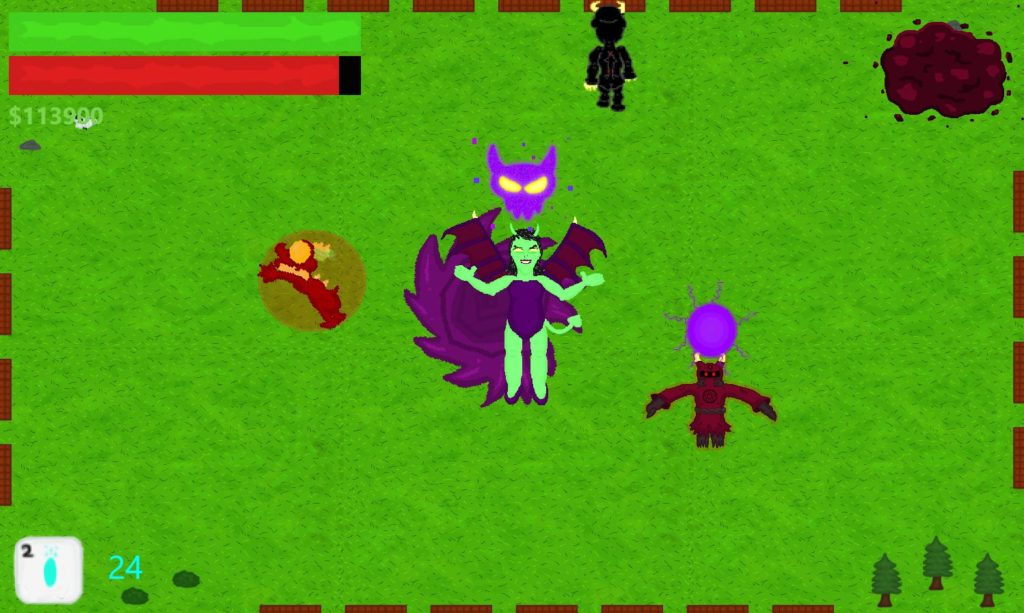 Demon of Justice contains fast-paced top-down shooter gameplay that’s easy to learn, but hard to master. Simply tap the screen and a laser blast will fly down towards the ground, and hopefully hit a hostile demon in the process!

In most levels, you’ll simply need to defeat a variety of demons until the timer runs out. New enemies get trickier, and more varied in their behaviors, so as the game progresses you will need to make sure to prioritize which enemies you want to hit!

After you collect some in-game money by defeating demons, you can use the game’s shop to buy a variety of different laser weaponry. This will affect how quickly the laser blast will fall, the size of the blast and if it has any unique effects upon landing.

Every 5 levels you’ll have to face off against a boss demon before you can continue. These demons are far more powerful than their smaller counterparts and have their own unique, chaos-causing behaviors you will need to deal with. 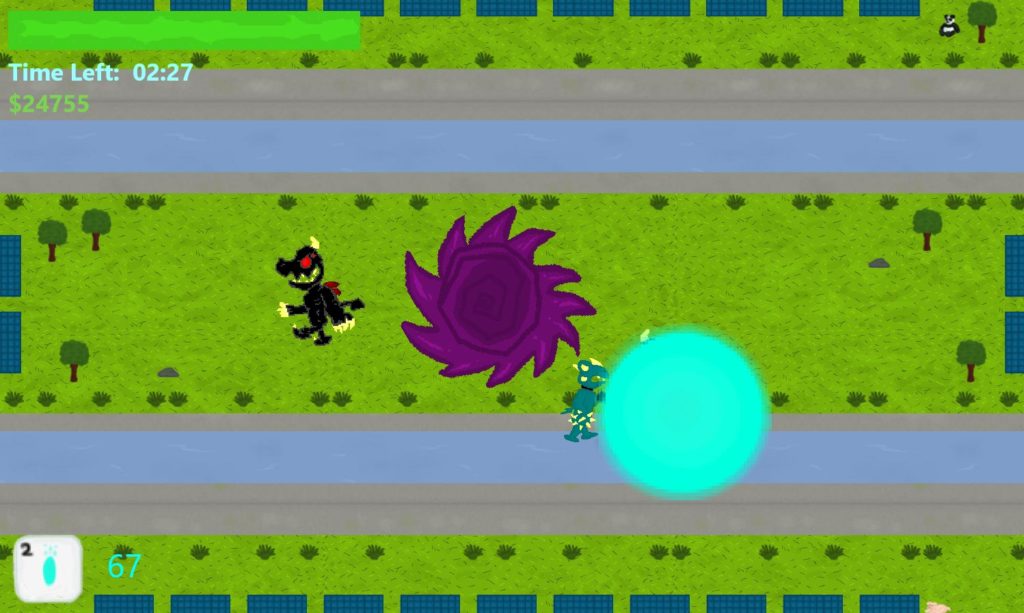 ◆ Exciting top-down shooter gameplay! Every five levels you’ll face a powerful boss demon, each with their own unique, chaos-causing powers.

◆ Unique levels! Overcome 25 unique levels full of action, and save multiple locations across the world from the global demon invasion. Fight against a wide range of demons with various behaviors.

◆ No microtransactions! The game will not force any in-app purchases on you, and all in-game money that you collect can be used in the shop to unlock powerful laser weapons. 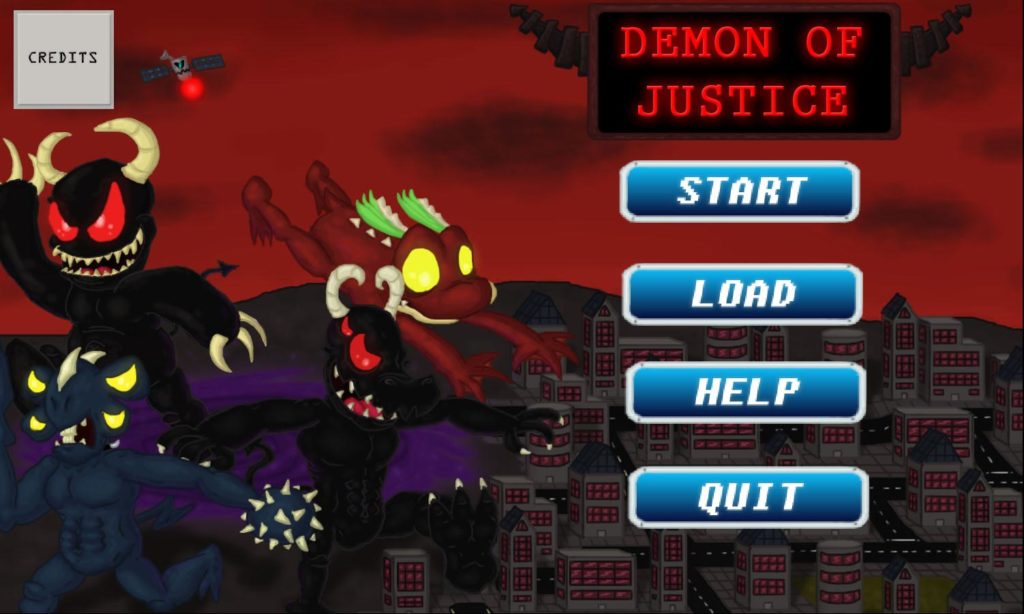 Demon of Justice was primarily developed using Construct 2, Adobe Photoshop and Gamemaker Studio’s sprite editor by a single developer, James Skinner. I wanted to challenge myself and create a game with a very clear vision in mind.

A talented artist, by the name of AnarchisedLute, provided artwork for the promotional art and the credits sequence in the game. You can see her Twitter here.

I’m interested in several areas of game development and would love to work on more video games in the future. At the moment I am working towards becoming a professional 3D environmental artist.

If there is enough demand for Demon of Justice I would be very happy to port the game to other game stores, and work on further independent games!

This article was Published by Edamame Reviews, Written by MorbidPandaUK.
Edamame Reviews cannot be held responsible for the content within this post.