Everyone reading this, please raise your right hand… Ok, was that hard? For most people, probably not, but for the unfortunate driver of the black car in Wrong Way Racing, this simple task proved to be just a little too difficult…

Everyone gets confused every once in a while, it’s a part of life, and luckily for most of us, we somehow survive. Sure our friends may look at us a tittle funny for the next few weeks, but most of the time we get over it and life continues just like it used to. Unfortunately in the case of the driver of the black car in Wrong Way Racing, he had a pretty hard time. (i.e. he’s probably dead…)

As most readers can probably tell from the title, Wrong Way Racing is a game about a racer who somehow managed to mistake the direction he was supposed to be driving. Normally you’d expect any “sane” person to realize their mistake and either quickly turn their car around, or go see a psychologist, but no, the driver of this car speeds on! Whether he’s gone completely insane, or thinks he’s being smart by refusing to follow the majority we will never know, but what we do know is that you the player have to help him survive for as long as possible. 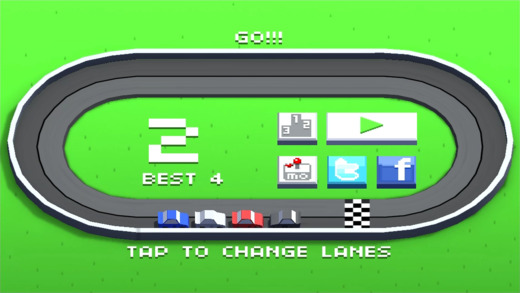 The moral of the review, sometimes it’s better to just go with the flow…

Wrong Way Racing is a crazy situation when you stop and think about it, but as a game, it’s a simple concept that’s easy to get a hold of, and enjoy.