We want to hire you! …Um, not the “you” reading this review – though we’re sure you’re awesome – but the Insane Briefcase Guy (Tucker) in today’s game, Ultimate Briefcase…

If “bad guys” started dropping bombs on the town or city you live in, what would your reaction be? Probably RUN FOR IT! -or at least, that’s what I’d do – but no, this brave bearded office guy protects his work (His Briefcase) by dodging the bombs and explosions that rain down around him!

What a guy! We need a guy like this on our team!

Your mission in this game is to help this brave little man avoid getting hit by tapping on the left or right half of the screen in order to move him around. The “bad guys” for some unknown reason also drop money and powerups together with their explosives, which can be collected and used to fight back.

The coolest and most common power up, a blue electric booster, will supercharge your guy’s briefcase, allowing him to block enemy attacks for a short period of time! The only downside to this boost is that it requires many, many blue boosters before it is usable, and a lot of the time, you’ll die in the process of collecting them… 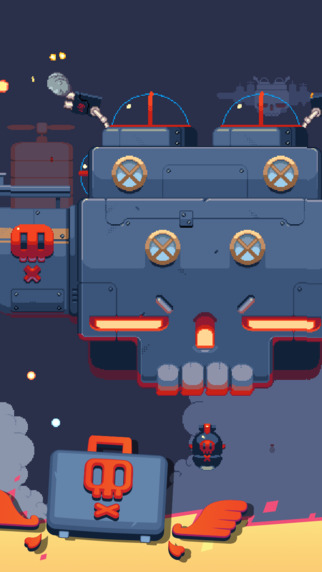 Some games are made to astound, others to inspire, but a lot of the time, games are made to make someone laugh. Ultimate Briefcase was one of the funniest games we’ve played in a long time. If you’re in need of a good laugh, how about giving it a try?