Twin Shooter is a very interesting game. In this game you’ll find yourself killing yourself more often than the enemies attacking you…

You see, in this very awesome space shooter you control two ships instead of one. As if that’s not hard enough, the ships are pointed at one another meaning if you’re not careful you’ll end up shooting yourself!

The most stressful thing about this game is that you often have nowhere to throw your frustration at but yourself, besides, you were the one that shot the bullet…

If you’re right hand and left hand are currently best friends, they might become enemies after playing this game. It’s that hard!

If you’re right and left hand aren’t on the best of terms but you’d still like to have a go at this game, never fear, there’s a two player mode.

I still can’t tell the difference between the two modes, but in this mode you are able to get a friend to take charge of one of the ships making Twin Shooter much easier to play. 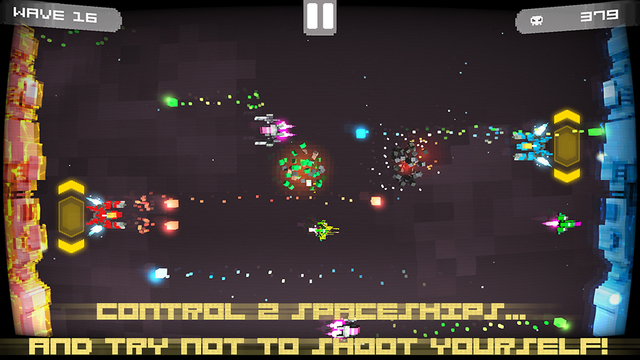 If you’re a guy with a whole lot of friends, or someone with really good left and right hand coordination you’ll love this cool free game.