Surfingers is a game that looks like a surfer’s dream come true. In this simple 2D surfer, you as the player have the ability to control the one and only thing that matters when surfing, the waves!

In this crazy little world surfing is a little more difficult than it is in ours, or at least, harder than it is in Australia.😎 The waves you ride on don’t follow the laws of physics most of us have become accustomed to… Each wave comes in a sort of ‘chunk’ like fashion and can be significantly higher, or lower than each another. This means if you’re not careful your player can actually crash into the side of a wave…🙄

To prevent your player from smashing into – or falling off – large walls of water, you in this game have the power to control the height of each ‘chunk’ of wave. You do this by either swiping up or down, and adjusting the height of the wave your player is currently surfing on. At first, the only real difficulty is avoiding smashing into other waves, but as the game progresses, things get a little more tricky.

Sometimes you’ll need to avoid semi submerged obstacles by raising the height of your wave in order to fully submerge them, other times you’ll get too high, and will need to lower the sea level a bit in order to avoid people enjoying a leisurely hot air balloon ride in the sky! It’s completely ridiculous but somehow awesome…😝 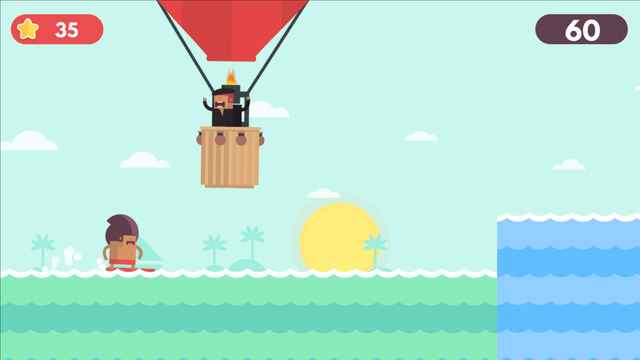 If you’d like to play possibly the world’s most ridiculously awesome surfer game, Surfingers is the best match we’ve found so far.