There are a few key differences in games that quickly put one game way above another. For games made on touchscreen devices the limits are literally the developer’s imagination. There are so many features you can implement into the flat surface that covers your smartphone, it can really get a little overwhelming.

In the case of Super Dangerous Dungeons, or Super DD for short, the most amazing feature is probably how easily you can just play it. This may not seem like much of a feature, but from a developer’s perspective, the ease at which you can play Super Dangerous Dungeons is amazing. You see, unlike console gaming, on a smartphone there are no buttons for the user to involuntarily feel for when deeply engrossed in the game they are playing. Making a game that requires on screen buttons is actually a surprisingly difficult thing to do!

Have you ever deleted a game from your phone because the buttons were just too difficult to control?

Anyway we’ve spent way too much time focussing on the awesome buttons of this game. If you couldn’t guess from the title, this game is based on an unfortunate dungeon treasure hunter who accidentally fell for one of the dungeons traps and is now trapped way down inside the dungeon he was planning to raid…

The graphics are a simple but nice 32bit style, and the story, though fitting, isn’t anything over the top. What we believe made this game rise to the featured charts of The Apple App Store, is the ease at which you can simply play… 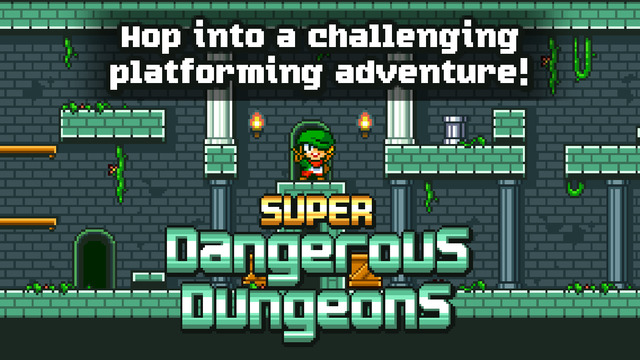 So, if you are after a game that you can just play, a game that feels comfortable in your hands and is super easy to control- here it is.

And, once again for developers, you need to check out this game!