Back in the good old days, video games offered fantastic Sci-Fi worlds which still stand out in our memories. With a huge amount of sniper hunting games, minimalistic arcade games, and casual games, we almost forgot how cool it was to have an adventure in a spaceship, (struggling with robotic monsters and avoiding hi-tech obstacles.)

Our team of developers at ARPAplus noticed that both Google Play and the App Store lacked good immersive games in the science fiction setting. When our game designer shared the idea to make an interesting first-person adventure we just looked at each other sitting in our chairs in the office and thought, “Why not?”.

As we mostly made and published adventure/quests games, we decided to throw off the idea of making a strictly Sci-Fi shooter, although we will try to add shooter elements in the next release. That is how the development of “Space 3000” adventure began. 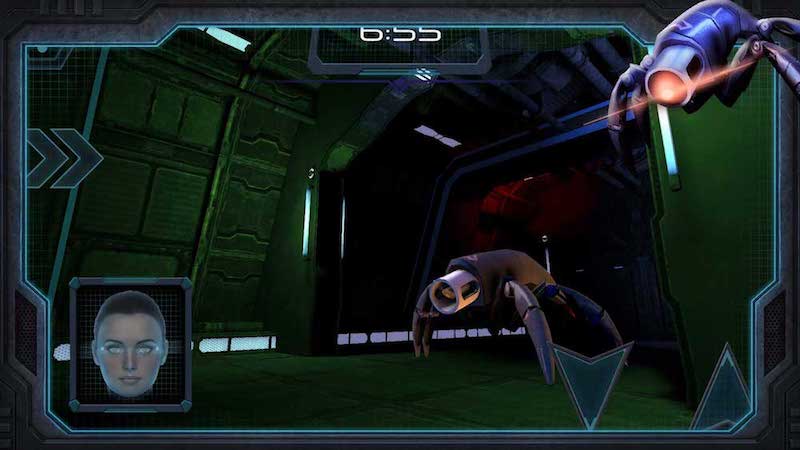 In the story, you play as a human living in 3000, named Vladimir-Ѧ550/934931. Your mission in this game is to resist the artificial intelligence that took over the entire universe, which is why you are in the spaceship.

You will receive tasks to solve such as: “Find Tools” or “Find a Portal”. The most important things for you to learn are to: Lurk, Crawl, and Stay Hidden!

The Spaceship system includes “Sentinels” which are everywhere – they are watcher machines ready to activate the alarm system, turning your mission into a failure. Laser systems perform a mincing role – some of them will kill you immediately while others will only harm you.

The game has a space horror element to it which is intended to create a cold space atmosphere.

1. This game has original gameplay that stands out in the oversaturated adventure game market. With well-balanced difficulty, the game should teach you to think before you move and it definitely won’t make you upset.

2. An interesting intro story and an immersive spaceship interior atmosphere is something new to mobile players nowadays (or rather, often overlooked as old).

3. The game is built in the Unity-3D engine and has very good graphics and sound assets, meaning we can guarantee a good gaming experience as well.

The game has been translated into all the major languages: English, Russian, Chinese, Spanish, Portuguese, French, and German. Available exclusively on mobile, the game is currently available on Google Play and the App Store. We would be very appreciative of any response such as a user review!

This article was Published by Edamame Reviews, Written by the ARPAplus Team.
Edamame Reviews cannot be held responsible for the content within this post.