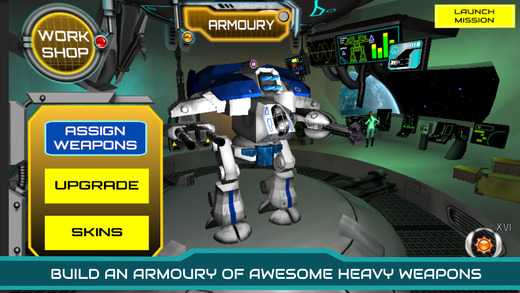 If you like making games – or would like to make games – SALVAGE ROBOT is a new game that will inspire you!

Built by the new indie team (the Golden Heart Team) SALVAGE ROBOT is the very first of their games to hit the App Store, and we must say it is a decent first step! Although there are always going to be aspects that could use improvement, the fact that they managed to launch such a high-end game first try is more than impressive!

Today we would like to share with you our interview with the Golden Heart Team, the creators of SALVAGE ROBOT.

Before we start, we’d like to thank the Golden Heart Team for participating in our interview, and for spending some of their valuable time answering our questions. Thanks guys!

Ok, how long have you been making Apps or Games for?

I’ve been involved in creating tabletop Sci-Fi & Fantasy games most of my life. An old friend introduced me to Unity back in November 2013. At that point, I had zero idea how to make any video games or apps.

I quickly found YouTube was full of tutorials and set about teaching myself while creating a game. There were so many pitfalls and frustrations but it was incredibly fun at the same time.

So this is your first creation?

Yes – Salvage Robot is my first video game creation. My original vision of giant robots knocking chunks out of each other out on the frontier of space was pretty close to the final product. Add in some battlefield salvage pick ups and cool ancient alien backstory, along with the ability to play either Solo or Multiplayer PvP and you have a fun action game with a lot of depth.

What do you use to make your apps or games?

Salvage Robot was created using Unity 4. All the 3D models were created in Blender, and all the graphic art and designs were achieved using Paint Shop Pro X3.

So, tell us about your app!

Salvage Robot takes place out on the frontier of human space, shortly after an interstellar catastrophe eradicates humanity from a group of localized star systems. This Event triggers the arrival of a wave of freebooters and salvage hunters, keen to gather what valuables they can from the now empty human star colonies. The player is one of these new arrivals, complete with a Salvage starship and giant Salvage Robot, known as a Salvage Rig.

Missions within the game consist of drop pod insertion and aggressive exploration to find anything valuable upon the battlefield. Ancient Alien Guardians and Junk Mech Raiders provide a variety of dangerous opponents, to be avoided or destroyed while trying to find as much salvage as possible within a given time limit. Battle environments range from blasted cities to remote ancient alien ruins and planets with bizarre ecosystems.

Players can also find themselves playing against or alongside other players, as Salvage Robot not only caters for Solo Play, but also feeds new players into new salvage missions, meaning you can play against your friends if you all start a mission at the same time, or you can find yourself encountering other Salvage Rig Pilots, running the same mission as you.

In the pipe is a huge expansion to Salvage Robot that will more than double the number of battlefields available and delve into the storyline behind the events. This expansion is scheduled for early December 2016 and will likely entail an in-app purchase for a small amount.

Wow! We look forward to trying out the new expansion!

Blendy! – Is this what it feels like to work at Starbucks?

Tornado.io! – Ok, this is just getting silly…😅

Knife Hit – You are your own worst enemy…😥