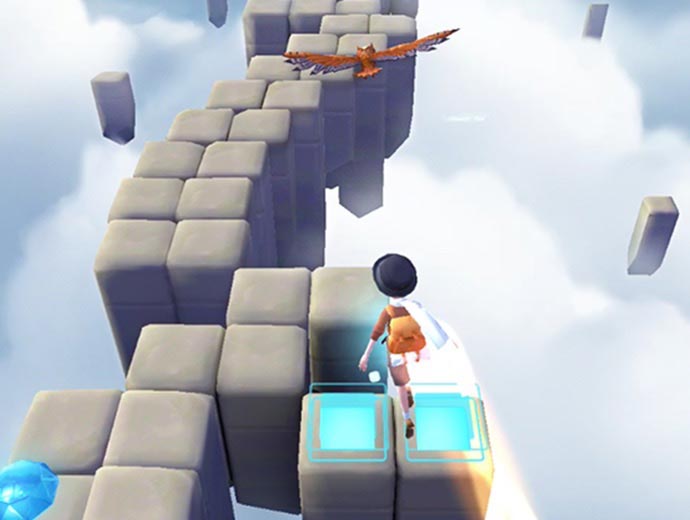 Do you love playing Rolling Sky (by Cheetah Games) because to be completely honest, we didn’t. This wasn’t because Rolling Sky was a bad game! In fact, we plan on checking it out again in the not so distant future since Rolling Sky is currently in the midst of a collab with Alan Walker we simply can’t miss!

That having been said, if you read our original review of Rolling Sky – which was written soon after its release on iOS and Android – you can really tell that we were reviewing a very different game to what it has now become.

Rolling Sky 2, on the other hand, is an amazingly well-polished game right off the bat, and, (we’re just going to say it), if this game had the same sort of music as its predecessor Rolling Sky, you would never want to go back to playing the original – it is that good.

Set on the same sort of obstacle-filled 3D track as the original Rolling Sky, the new and improved Rolling Sky 2 is filled with shockingly beautiful obstacles that look as though they were stolen from a scene in a Disney princess movie. It wouldn’t be too much to say the graphics in this game are a work of art.

With such amazing graphics, it is actually kind of sad to see that the music the graphics in this game are currently being synchronized to sound like generic stock tracks you can buy online for less than $15.

Although the music in this game isn’t bad, (there are some really nice stock tracks you know), we would much rather listen to something from the likes of Alan Walker or Marshmello which, judging from the collaborations the original Rolling Sky has had so far, may not be wishful thinking!

For now, Rolling Sky 2 is an insane bump up in visual beauty from the original, but quite a bit less impressive when it comes to the actual music.

Rolling Sky 2 is the sort of game we will have to re-visit in the next 6 months or so in order to properly review.

For players who want to play this game right now, you’ll probably be left with the same impression as we were with the original Rolling Sky. A cool-ish game with very few songs. However this time we won’t be so foolish as to leave it at that.

Come back in 6 months to see what this game has become.