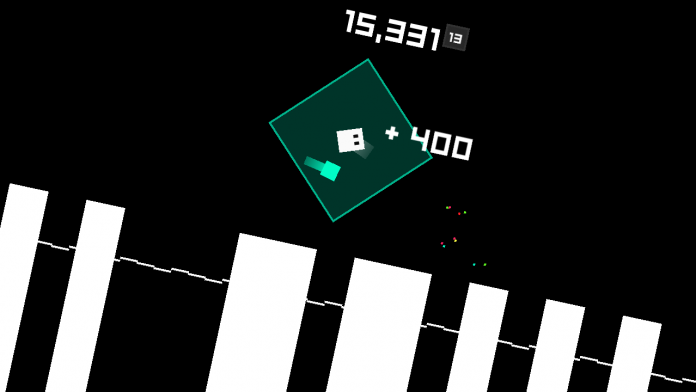 We will be honest, we never expected Pix Hop to be anywhere near as cool as it turned out to be…😓 We did expect it to be a “cool” game, but this is something of a different level…

Said simply, Pix Hop is – amazing music, magnificent graphical effects, and a super simple gameplay system fused together to create a single title. Is this game for everyone? Probably not. If you don’t fit into one of the 4 categories below, you should probably stop reading this review immediately.

Now, for those of you who were wondering about how the game is actually played, it is actually pretty simple. Based on a stage made of white pillars which are constantly rising up and sinking into a pixelated ocean(?) your mission in this game is to prevent a constantly bouncing cube from falling into the ocean below by tilting the stage in order to move your player around.

The game can be played either using tilt controls or touch controls depending on how you like to play games.

The enemies/obstacles you’ll find in this game are pretty crazy, (i.e. There are heaps of them!), suddenly firing lasers at you, blasting toward you, randomly shaking your screen, and much, much more, the enemies – although deadly – actually add quite a lot toward this game’s awesomeness.

Lastly, the graphics and music are… Difficult to describe…😓
Both the sound effects and the graphics fit together so perfectly you’ll begin to wonder which was made first. With both the music and the graphics equally complementing one another, all we can say is, “If you love graphical effects and music, congratulations you’ve just found your next favorite game.”

Has Beat Stomper been your favorite game up until today? Who knows, we may have just found your next favorite game!

With awesome graphical effects, a very nice soundtrack, and super simple controls, this is going to be a hard game to beat… (Unless you’re up against Beat Stomper which pretty much has all the same stuff just in a slightly different gameplay system.)