Ok… Neon Drive on the app store has the decryption ’80s style arcade game. This may be true for the car, but that’s about it… In fact, the closest thing to this game we can think of is probably Tron! This game looks awesome!

There are three modes to the game, though unfortunately due to lack of time, we could only cover one in this quick review.

In the most basic mode, the aim of the game is to avoid large glowing patches of “death matter” blocking off the road by skilfully switching between lanes. You can easily do this by tapping on the left or right side of the screen, depending on which lane you want to be in…

The most difficult part about this game is probably the fact that it switches from 3D to 2D in the middle of your gameplay. The controls don’t change so there is really not much to stress about, but the sudden change of perspective from 3D third person to 2D overhead is actually pretty startling.

The concept, the controls, and even the rules are simple, unfortunately the gameplay is not. Neon Drive is probably best described as “An easy to play monster of a game!” 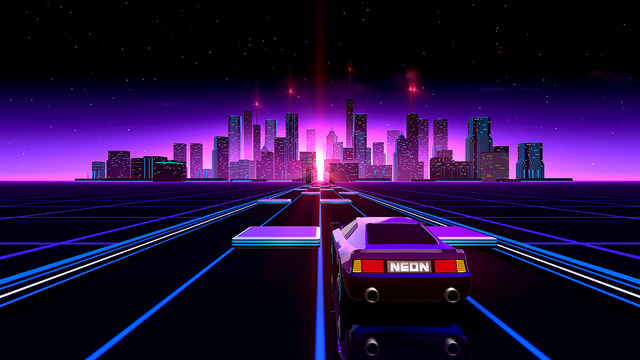 A while back I had a gamer tell me that you’ll find all the best games on a desktop PC. Neon Drive is another one of those game that I think simply proves him wrong.

If you have a device that will run this beautiful game, we strongly recommend you try it out.