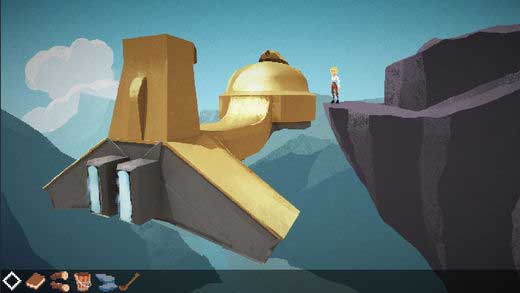 All this said, after downloading the game and taking a look at one of the many beautifully artistic pixelated landscapes you will soon lose any doubts you may have originally had about the quality of this game. Prepare to be blown away!

After you’ve finished admiring the beautiful scenery and are once again ready to start playing the game, you will likely soon realize just how easy playing this game really is. Featuring a gameplay system centered around, (Touch to Move and Interact), you will soon figure out how to move around the world and can start your new life as a dairy farmer.

Unfortunately, your new life as a dairy farmer is only short lived… Soon after creating your first batch of cheese, your entire heard of cows are abducted by a massive UFO and your life as an ordinary dairy farmer comes to an abrupt end…👽

Overall, the storyline is far more exciting than that of Paul Pixel, (a similar story oriented game released back in 2016), and the action packed graphics and sharp plot twists make playing Milkmaid of the Milky Way an exciting experience overall.

All this said, there are a few downsides… For our team of action loving game reviewers, the slow-ish speed at which the main story unfolded was a little annoying.

Add to this the somewhat vague missions you are required to accomplish and the small touch-boxes when selecting objects and locations on your screen, and you won’t exactly end up with a game designed for action gamers. If you’re an action gamer Milkmaid of the Milky Way probably isn’t the game for you.😕

Other than that, if you’re into games with a great story, beautifully crafted pixel graphics, and cows🐮, this is the game for you.

Milkmaid of the Milky Way
1 of 5

Are you ready to set out on a crazy 2D adventure?

With beautiful graphics, a story line that is anything but cheap, and poetic lines throughout, this is one of those games story loving gamers simply can’t get enough of.