The almighty, the legendary, the ultimate! In almost every racing game we’ve ever played, “somewhere” you’ll find the figure 8 race track… except in Loop Drive 2…

Loop Drive 2 is a game that consists of 2 race tracks – only two – both of which at first glance “look” like standard figure 8 race courses, but after taking a closer look you’ll soon realise the destruction that lies just around the corner…

The figure 8 in this game consists of two interlocking circular race tracks with drivers on both sides. For a driver to complete a single circuit on this absurd race course, you are required to cut across speeding traffic twice without getting hit by another driver.

If this course isn’t enough to put any sane driver off, your car seems to be a little faulty… You see, though your car does have brakes, they seem to be a little weak, because even with your brakes on max, your car will continue to creep forwards😨 On your own half of the course this isn’t too bad, but when approaching a busy intersection…😱

Now, Loop Drive would be crazy enough with just this – in fact this is Loop Drive – so you’ve got to remember it’s not loop drive we’re talking about here, it’s “Loop Drive 2…”

In addition to the crazy intersecting loops in Loop Drive 2, you’ll also find a totally absurd course made from two interlocking circles and a highway.

The amount of things that could go wrong on this course are simply countless. 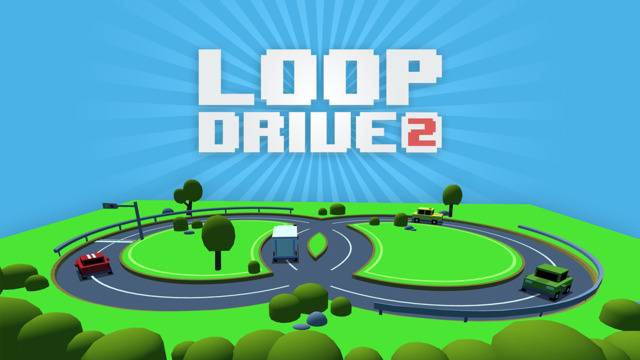 Enough about the story, how is Loop Drive 2 as a game? As a game, this game is extremely balanced. The speed is a nice, not too fast but not too slow “goldilox level.” The hit area – the area around a character determining collisions – is very generous, and saved us multiple times during gameplay.

If you’re after a simple well balanced racing game, we’d recommend this game any day.

One reply on “Loop Drive 2 by Gameguru – Review”

Hi,I want to say Thank You,for your support,I have not played games yet,but I will now.Much Aloha,Ian