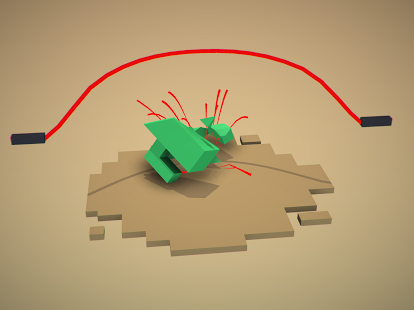 We recently featured a game that could be described as the “Scariest Skipping Nightmare” of a game we have ever seen! We have seen some rather terrifying skipping games, but none of them featured a skipping rope quite as sharp and deadly as the one in Jump Doper…😱

If you have yet to check out our review of Jump Doper, you can do so here!

Before we start we’d like to thank the Cozy Game Pals Team for participating in our interview and for answering all of our geeky questions! Thanks Guys!

Thanks for taking the time to talk to us about Jump Doper, could you kick-start this interview by telling us a little about your studio and what drew you to Game Development?

Our team is just the two of us making games in our free time. Crista does the art and Bryan does the programming.

We both are creative people that like making stuff and we like video games, so making games was a natural fit.

First question. What was the core idea (or inspiration) that sparked the development of Jump Doper?

Crista wanted to learn 3D modeling for the first time, and Bryan wanted to make a game that was mobile friendly. So together we came up with the idea of a one-button game with simple 3D models.

So with these ideas for inspiration, a simple jump-rope game was our answer. The rope cutting the objects was just for fun.😆

What were the hardest problems you faced during the different development stages of Jump Doper?

Jump Doper was kind of our response to development problems we were having as a team. We couldn’t finish any of our projects because they were too ambitious. So we were careful to make sure the design of Jump Doper was really simple.

For the most part, making Jump Doper went smoothly once we had the idea down. The only real hiccup we had was adding the leaderboards, we never really got online leaderboards working.

For our nerdy Developer Fans, what programming language and or software did you use when developing Jump Doper? And was it a good decision?

The game was put together in Unity using the C# programming language. Unity is nice because it let us release on multiple platforms.

Crista made all the art in Sketchup. SketchUp isn’t the best modeling software for games, but it is good for beginners because it is so simple. We probably won’t use SketchUp again for our next games, but it was a good first step.

What advice would you give to a new player trying Jump Doper for the first time?

Unlock the water bottle. It is OP.😆 (Overpowered)

Where do you get your inspiration or ideas from?

So we will usually pick a thing we want to learn or practice and start from there. We’ve also made this website to help us generate ideas when we feel stuck: bit.ly/game-inspiration

A few words to Jump Doper fans on Edamame Reviews. Any new games in the near future? What can we look forward to next?

We actually made a couple of games after Jump Doper. You can find them on our website. We took a break for a few months, but we’re figuring out our next game idea now!

We really like that Edamame Reviews shares small games like ours. We also think the reviews are super cute!

Basketball Superstar Review: You’re 100% in control of everything!

Agent A – Finally! Our review of the best puzzle game...

Walk Master – A game that will make you re-think whether...