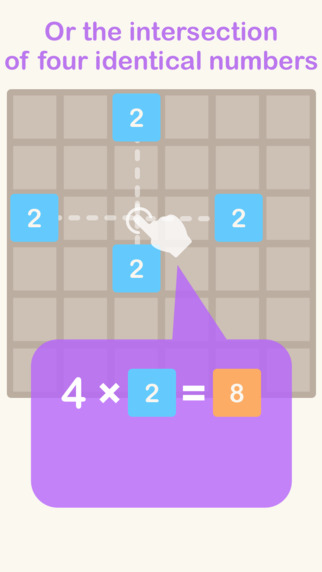 The Power of Two is a game that we believe has the potential to go viral. With a similar concept to 2048, this game isn’t too new and revolutionary, nor unoriginal and boring. Put simply, this game is perfect.

Today we’d like to share with you our second interview with the amazing developer of The Power of Two, Hequan Li.

Original Review -> Check it out!

Before we start, we’d like to thank Hequan Li for participating in our interview, and for spending some of his valuable time in answering our questions. Thanks Hequan.

Ok first up, why did you decide to make The Power of Two?

The idea comes from one of my previous games “Cross Crush Gems“, combined with the famous number puzzle 2048. I guessed I could make a similar puzzle game with a different game mechanism, since it’s a very simple idea. It took no more than 1 week to code. So, why not give a try.

Cool😃  In our last talk with you, you told us how your new game “The Power of Two” has a very similar base to that of your previous game, Cross Crush Gems. Does this mean The Power of Two was a relatively quick build?

Yes! Actually I directly copied all the Model codes from Cross Crush Gems. They have the same playable area, which are n*n grids, and same mechanism (find the identical objects on four directions).

Ok, as usual, What was the hardest problem you needed to overcome when developing The Power of Two?

Although it’s a quick build, there’s other stuff I should optimize. For example, how can I deal with “eliminating with three identical numbers” ? In the first versions, I simply added them up, like 2+2+2=6. But the gameplay sucked, since the table easily got stuck, easily losing the game. At the end of the day, there are plenty of weird numbers like 34, 18, 9.. which you have no idea how they were generated.

Then I tried a few tricks to deal with this problem, most of which did not work either. One day I came up the idea, why not just delete all those numbers != 2^n ? I tried, and was satisfied with the result. The game play is considerably longer, without losing the challenge.

That optimization you did there is no doubt what makes The Power of Two so addictive… Lastly, a direct question from one of our editors. “What is your high score?” and “Are there any secret tricks or tactics to getting a better score?”

As the developer, there was that “subtle emotion”. Now if you have a look at the leaderboard, the largest number is 8192, seems impossible!!!

Well, as the tactics, I guess my friend has more to tell. But I can mention some general tricks that may be helpful.

1. Make large numbers at corners or edges so they will not block the path for generating other small numbers, since those large number will remain in the same place for a long time.

2. Do not make lots of 4, 8, 16 etc. The best solution is just making two and combine them, so you don’t need to waste a site for a number that’s not useful.

3. When there are too many numbers and you think maybe you’re gonna lose, do not make 4 from 2+2, only make 2 from 1+1, then you have more chance to eliminate three identical 2. I use this trick every time I get a large number, I clean all the plate, then start with very few 1s or 2s.

A few words to The Power of Two fans on Edamame Reviews.

I have no plan for a new game in the near future (1 month) . I need to do my “real” work for some time now. I only write games as a hobby. So I won’t start the next project until I have another really good idea. But I’ll continue updating Cross Crush Gems and The Power of Two, add new features here and there, add night mode, or better UI etc. And I really need feedback from everyone. I continuously check reviews and comments for my game, so please leave comments or contact me if you have any suggestions or complaints.

I’ve reached several review websites now. I have to say, Edamame Reviews is the fastest in response and most patient one. They respond to every game. Lots of websites and channels would reply to your request email as “bla bla bla… we can only review 1% or less ….. bla bla bla” and you never hear from them after that. If you have a limited budget, but still want a review, Edamame Reviews is one of the best choices I know.

Blendy! – Is this what it feels like to work at Starbucks?

Tornado.io! – Ok, this is just getting silly…😅

Making the Nintendo Switch 100% more shareable while on the go!😆