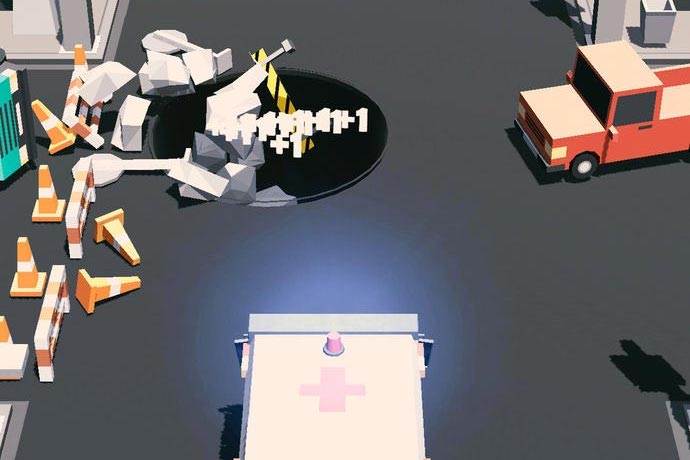 Have you ever wondered what it would be like to drive an ambulance? In most parts of the world, an ambulance is one vehicle you don’t get in the way of… Whether you are driving extra fast (or extra slow) the chances of you getting pulled over are pretty much zero – if you are driving an ambulance with flashing lights. 🚑🚑🚑

But what if this wasn’t the social norm?

What if we lived in a society where construction workers, law enforcement officials and random people on the street got in the way of you and your mission of getting to the hospital as fast as possible!!?? 😱

Well… The guys in this game found a rather brutal solution…

Set in a nicely animated low-poly 3D world, Hollow! (by Rooster Games) is a game about helping an ambulance make it back to the hospital without smashing into anything and blowing up. Simple enough.

Played using the same kind of black hole as was used in Hole.io (by Voodoo), Hollow! is played by swallowing up anything and everything that stands in your path! The more things you swallow, the bigger you get, !

Although the chances of your casualty not making it to hospital in time shouldn’t be a problem with such a big and powerful disaster on your side – unfortunately, the person driving this ambulance is either dead or eternally lost so… yeah… Hollow! is an endless game. 😂

If you’re in need of a game that expands on the Hole.io universe in a way that doesn’t feel like just another rip-off, Hollow! is currently the best game we are aware of! If you know of any other laughable games we should definitely check out, please feel free to let us know in the comments below!

In need of a laugh? This game will do the trick. 😂