Most people by the age of 5 know quite a few things about excavators, trucks, cars and tanks. Kids love these big machines and know absolutely everything there is to know about them. Most of us could imitate the loud noises these machines make with pitch perfect tone and volume – much to the dismay of our parents who had to put up with it all…

The driver behind the wheel of the green tank in Bumper Tank Battle, seems to have somehow been deprived of his childhood education in tanks. The way this guy drives his tank is just wrong! Swerving around the screen like a guy who has had a little too much to drink, the driver of this little tank uses, not the gun mounted above him, but the actual tank itself to ram into the back of his enemies! Totally Absurd! Crazy! But somehow it works…

Perhaps this guy’s tank is just way stronger than the enemy’s but somehow it works, just so long as you ram them from behind (where the enemy doesn’t have guns…)

The enemy tanks, which there are an insane number of, seem to be controlled by drivers with a similar “tank education level” as ours and swerve wildly around the screen crashing into walls, rocks and even their own team mates.

Actually managing to crash into the back of one of these super erratic drivers either requires a lot of luck, or an insane amount of skill, depending on what you’d like to call it. 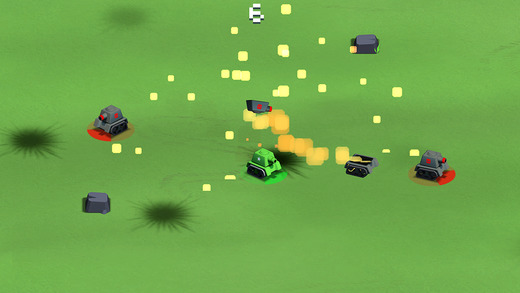 Bumper Tank Battle would make a crazy scene to witness in real life – that’s for sure – but as a game, this simple concept makes a unique and easy-to-play game we expect most users to enjoy.

If you loved this game, you should probably check it out.