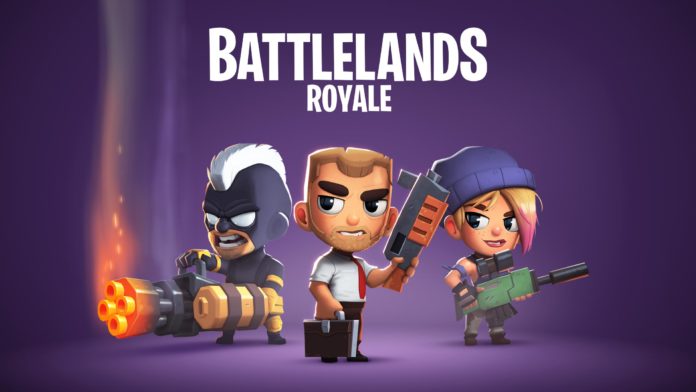 We’re a little worried. This game is so much fun, the guys at Futureplay could probably get sued over it. If you’re not sure what we’re talking about, perhaps you should try searching PUBG vs Fortnite…

Battlelands Royale (by Futureplay) is a very familiar looking game. Set on a massive FFA battleground, 32 players enter, only 1 leaves… or at least, only 1 leaves a champion!

Played using a set of 2 on-screen joysticks in order to control your player’s motion as well as the direction in which you both aim and shoot, Battlelands Royale features a top-down camera angle which allows you to see a short distance 360º around your player which is kind of perfect on mobile(!) where spinning around to shoot at an enemy behind you is way easier said than done…😅

After being thrown into a pool of 32 players, you are given roughly 10 seconds to choose your starting location on the map before being dropped down onto that location via parachute. Unlike PUBG or Fortnite where you can adjust how fast you land by pulling your shoot earlier or later, everyone lands at the exact same time in Battlelands Royale, making the game ultra fair for everyone. One less excuse for when you die right away…

Once you have both feet on the ground, the first thing you’ll want to do is get your hands on a Gun! In total there seem to be about 5 to 6 different guns you’ll find scattered literally everywhere on the map. Once you get the hang of things, it is fairly easy to distinguish between different weapons, making it easy for you to find just the weapon you need.

Other than weapons, you can also collect ammo which is automatically compatible with whatever gun you are using, shields which will allow you to get hit a little harder than your opponents, and health kits which can be used to regain your player’s health. Pretty standard stuff.

As you have probably already guessed from our title, the graphics in this game are probably best described as Fortnite simplified. Everything from the fonts, all the way to the player’s expressions look and feel like something we’ve seen before only simplified. Although this isn’t a bad thing for players, it could potentially put Futureplay in danger of getting hammered by Epic Games…

In an industry saturated with clones that are trash when compared to the original, this is the first copy we’ve seen in quite a while that we (1) actually enjoyed playing more than the original (on mobile), and (2) actually think there is a need for.

If you find that playing the full-on battle royal games you enjoy on a desktop or console is just too much for your iOS or Android device, why not check out Battlelands Royale you’ll probably find yourself pleasantly surprised with just how fun this game really is!